Trading across Britain’s managed pub and restaurant sector improved in November with collective like-for-like sales up 1.5% against the same month last year, according to latest figures from the Coffer Peach Business Tracker.

Both pub and restaurant operators saw positive sales during the month – with collective like-for-likes ahead 2.1% and 0.6% respectively. London outpaced the rest of Britain with like-for-likes up 2.3%, compared to 1.3% outside the M25.

“The November figures will be welcome for a market that has seen generally flat trading across the year, and operators will hope this upward trend continues into the festive season,” said Karl Chessell, director of CGA, the business insight consultancy that produces the Tracker, in partnership with Coffer Group and RSM.

“Managed pubs have continued to trade better than the restaurant market, and especially in London where collective like-for-likes were up 3.1%. Restaurant chains also did marginally better in the capital, with sales up 0.9%, compared to 0.5%, but as the figures show remain under pressure from increased costs and tough competition,” Chessell added.

“Drink sales were the main driver of pubs’ better performance, up 3.0% against a 0.6% uplift in food sales,” said Chessell. “Chains are continuing to open new sites, and although the rate of expansion has slowed there were more openings than closures among the Tracker cohort over the month.”

“With retailers recently reporting the biggest drop in footfall for the month of November since 2009, the relative health of eating and drinking out is a better indicator of where the future of the High Street lies,” said Paul Newman, head of leisure and hospitality at RSM. “For operators, many will be hoping that the growing Brexit uncertainty drives consumers to seek solace in their restaurants, pubs and bars throughout the all-important Christmas trading period.”

“The figures reflect what we are experiencing at the “coal-face” with an ever-increasing demand for public houses and indeed, late night licence bars, not only in the capital but across the country,” added David Coffer, the Coffer Group’s Chairman. “The demand for restaurant space is increasing but is reflective of the current political uncertainty. Traditionally, there will be an acceleration in restaurant trade as we approach the seasonal period and hopefully that will give an injection of confidence in the market. There is no doubt that currently drink-led operations are leading the way. Comparatively, there is a considerable amount of restaurant stock hitting the market and once this has been taken up, we anticipate further growth in this part of the sector.”

Total sales, which include the effect of new openings since this time last year across the 49 companies in the Tracker, were ahead 3.7% compared to last November.

Underlying like-for-like growth for the Tracker cohort, which represents both large and small groups, was running at 0.8% for the 12 months to the end of November, virtually the same as at the end of October, showing that the eating and drinking out market remains essentially flat. 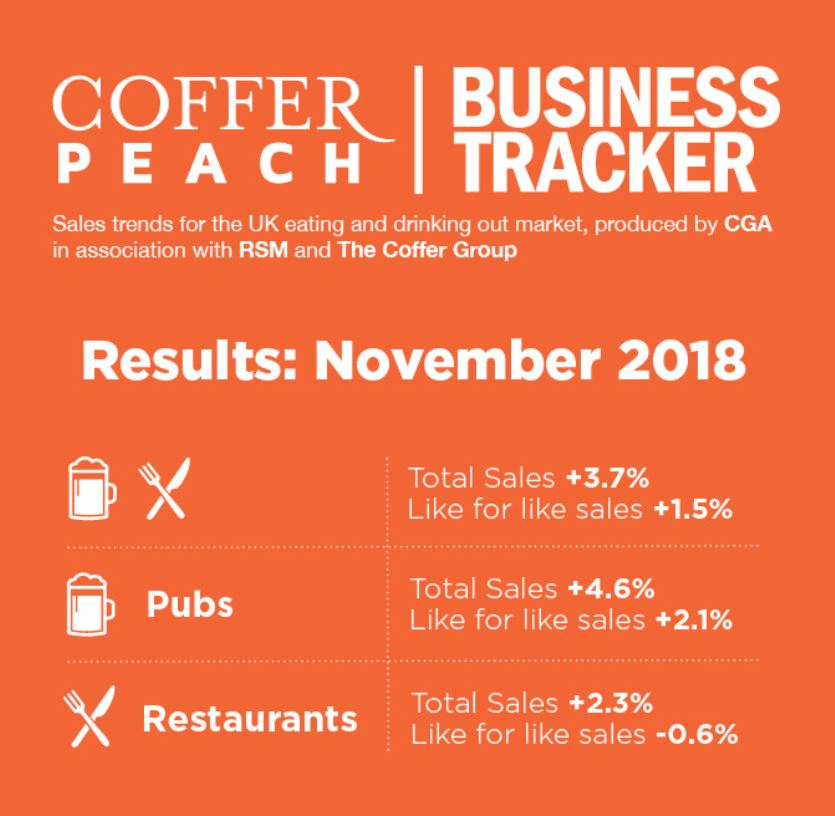