While the retail sector struggled, Britain’s managed pub and restaurant companies had cause to celebrate over the six-week Christmas and New Year period with collective like-for-like sales up a healthy 4.1% on 2017, according to latest figures from the Coffer Peach Business Tracker.

Both pub and restaurant operators saw positive sales growth over the festive season, with pubs enjoying the biggest uplift with collective like-for-likes ahead 5.1% against a 2.4% increase for restaurants.

London also benefited more than the rest of Britain, with like-for-likes over the six weeks to January 6 up 5.0% compared to 3.8% outside the M25.

“This is all in stark contrast to the gloom hanging over retail, which according to the British Retail Consortium suffered its worst Christmas for a decade with zero sales growth,” said Karl Chessell, director of CGA, the business insight consultancy that produces the Tracker, in partnership with The Coffer Group and RSM.

“What these Tracker figures suggest is that consumers are being more selective about where they spend their money, and are looking for memorable experiences – like going out for a meal or drink with family or friends over Christmas – rather than just buying ‘things’,” added Chessell.

“The fact is the eating and drinking-out sectors had an excellent trading period in their busiest time of the year,” said Mark Sheehan, managing director of Coffer Corporate Leisure. “Consumers escaped the political turmoil and headed for pubs and restaurants to escape the tedium. Pre booked sales in particular were strong and the months ahead are going to be tough but at this crucial time trading was robust.”

“This is a strong result for the sector, with both pubs and restaurants benefitting, driven in part by both helpful weather comparatives and an extended holiday period for many families,” added Paul Newman, head of leisure and hospitality at RSM. ”That said, discounting is already picking up and we won’t know until later in the year if increased sales have converted to profit. This conversion level will be crucial for operators who continue to face rising costs and more cautious consumer spending.”

Drink sales were the major driver of growth in pubs over the period, up 6.4% on last year compared to a 3.6% rise in food sales, the Tracker figures show.

“Premiumisation will be a big part of that, and trading-up appears to have helped restaurants too, as the number of covers served rose only 1.3% from last year,” Karl Chessell observed.

“What will be most encouraging for these pub and restaurant groups is that trading was positive throughout December, following a 1.5% sales uplift in November,” he added.

Underlying annual like-for-like growth for the Tracker cohort, which represents both large and small groups, was running at 1.0% for the 12 months up to the end of the year, up from 0.7% at the end of November.

Total sales over the six week festive period, which include the effect of new openings since this time last year across the 49 companies in the seasonal Tracker cohort, were ahead 7.1% compared to same period in 2017. 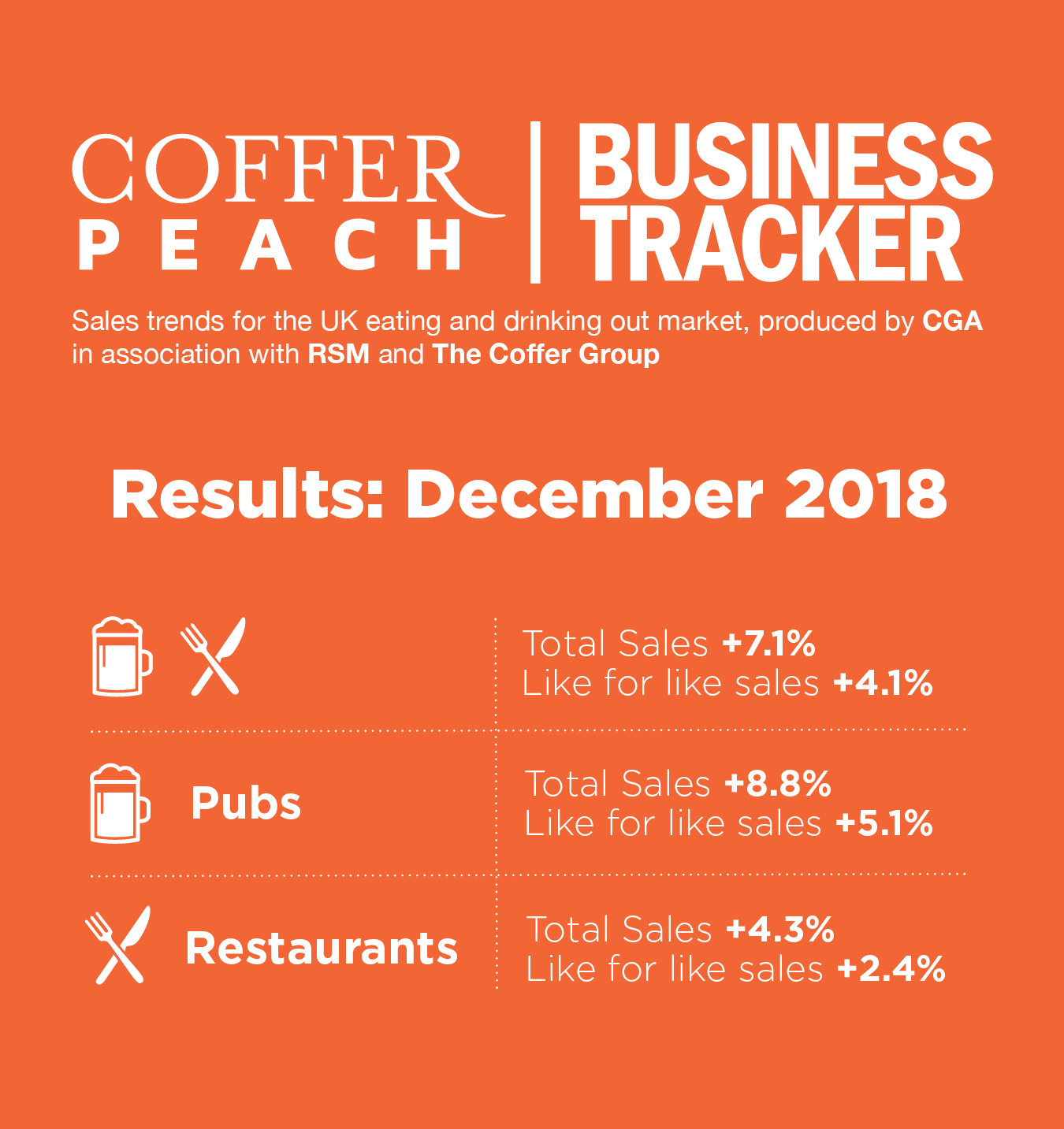