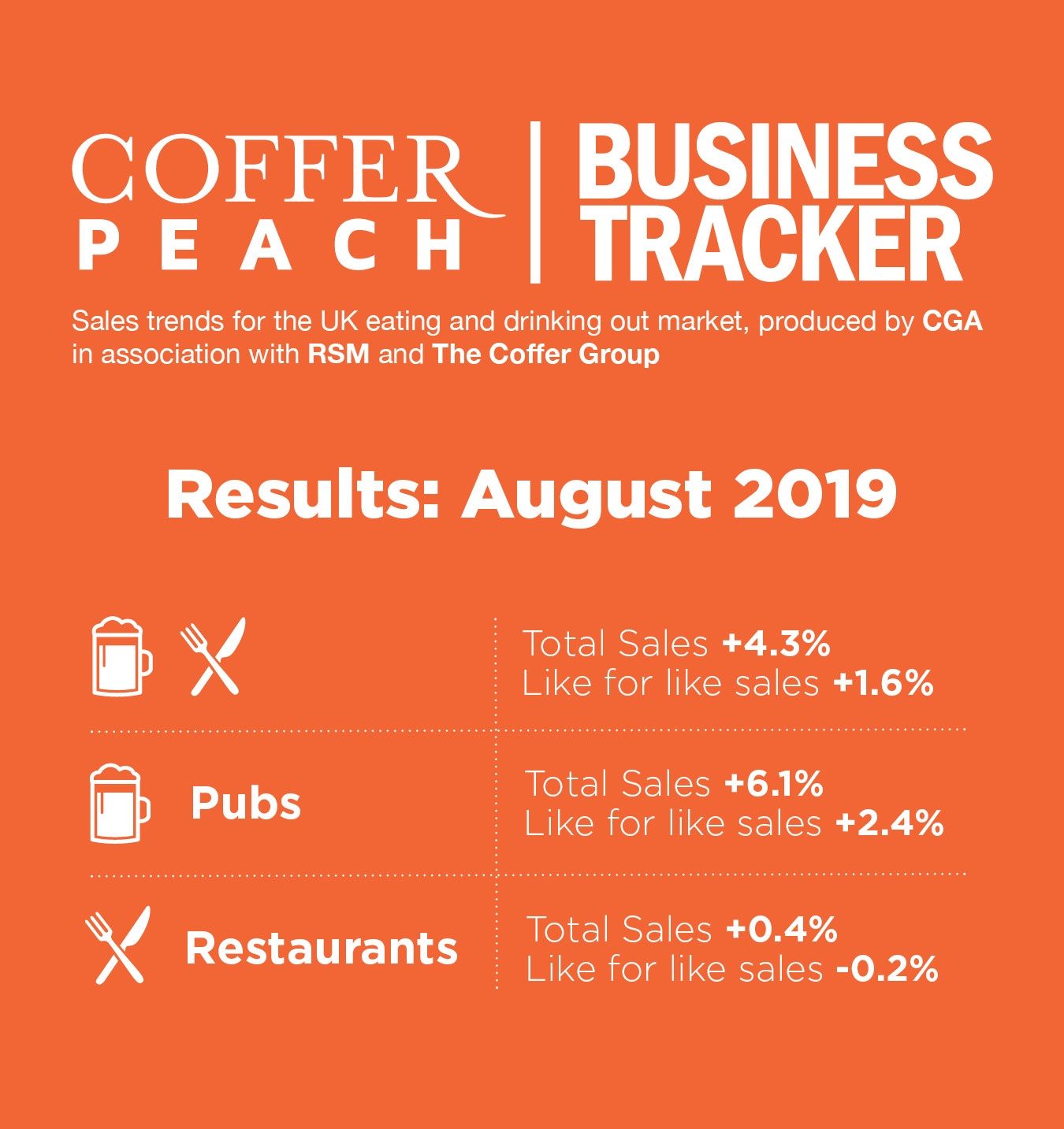 • Collective like-for-like sales up 1.6% in August
• Drink-led pubs and bars up 4.1% on back of late month heatwave

Britain’s managed pub and restaurant groups saw collective like-for-like sales grow 1.6% in August against the same time last year, with drink-led pubs, and especially those in London, being the best performers, latest figures from the Coffer Peach Business Tracker show.

“The weather, as is often the case, played a big part in shaping sales, with the hot weather in the run-up to and during the bank holiday weekend boosting pub trading and suppressing restaurant sales,” said Karl Chessell, director of CGA, the business insight consultancy that produces the Tracker, in partnership with Coffer Group and RSM.

“The good news is that, even with the uneven effect of the weather, the underlying performance was 1.6% up on last August, following growth of 1.2% in July,” Chessell added.

“These are solid numbers generally with pub sales again outperforming restaurants partly helped by the weather. Consumer habits are changing fast especially in the restaurant sector, evidenced by The Restaurant Group announcing that they are to close up to half of their mainstream restaurants over time. Until recently these were seen as the best portfolio of sites in the market and demonstrates the difficulties being experienced by many restaurant chains,” said Mark Sheehan, managing director at Coffer Corporate Leisure. “Only the exceptional are performing well. The pub sector by contrast is resilient. Pubs are generally unbranded and don’t suffer from the often-limited lifespan a brand may face.”

Managed pub groups recorded like-for-like sales growth of 2.4% for the month, with drink-led sites ahead 4.1%. “Drinking pubs in London were the ones that really benefitted from the mini-heatwave, with a 5.0% like-for-like boost,” observed Chessell.

Pub groups saw drink sales up 3.8% over the month, with food sales marginally down 0.1%.

Restaurant groups had a more subdued month, following a good July, with collective like-for-like trading down, but only by 0.2%.

Paul Newman, RSM’s head of leisure and hospitality, said, “Despite ongoing political uncertainty and with the UK on the cusp of a recession, Britain’s drink led pubs had much to cheer in August with sales buoyed by the long, hot days that ended the summer. The news for restaurants was less upbeat as consumers look to balance their household budgets by cutting back on eating out. With underlying costs outpacing top line growth, we fear some food operators will struggle to meet upcoming quarterly rent bills which could lead to further casualties in the UK mid-market dining sector.”

Regionally, London performed better than the rest of Britain, with like-for-like trading up 2.9%, against 1.2% for outside the M25. Restaurant groups in the capital were also in positive territory, up 0.5% against minus 0.5% outside.

Total sales across all companies in the Tracker, which include the effect of net new openings since this time last year, were ahead 4.3% compared to last August.

Underlying like-for-like growth for the Tracker cohort, which represents both large and small groups, was running at 1.7% for the 12 months to the end of August.

The Coffer Peach Tracker industry sales monitor for the UK pub, bar and restaurant sector collects and analyses performance data from 55 operating groups, with a combined turnover of over £9bn, and is the established industry benchmark.