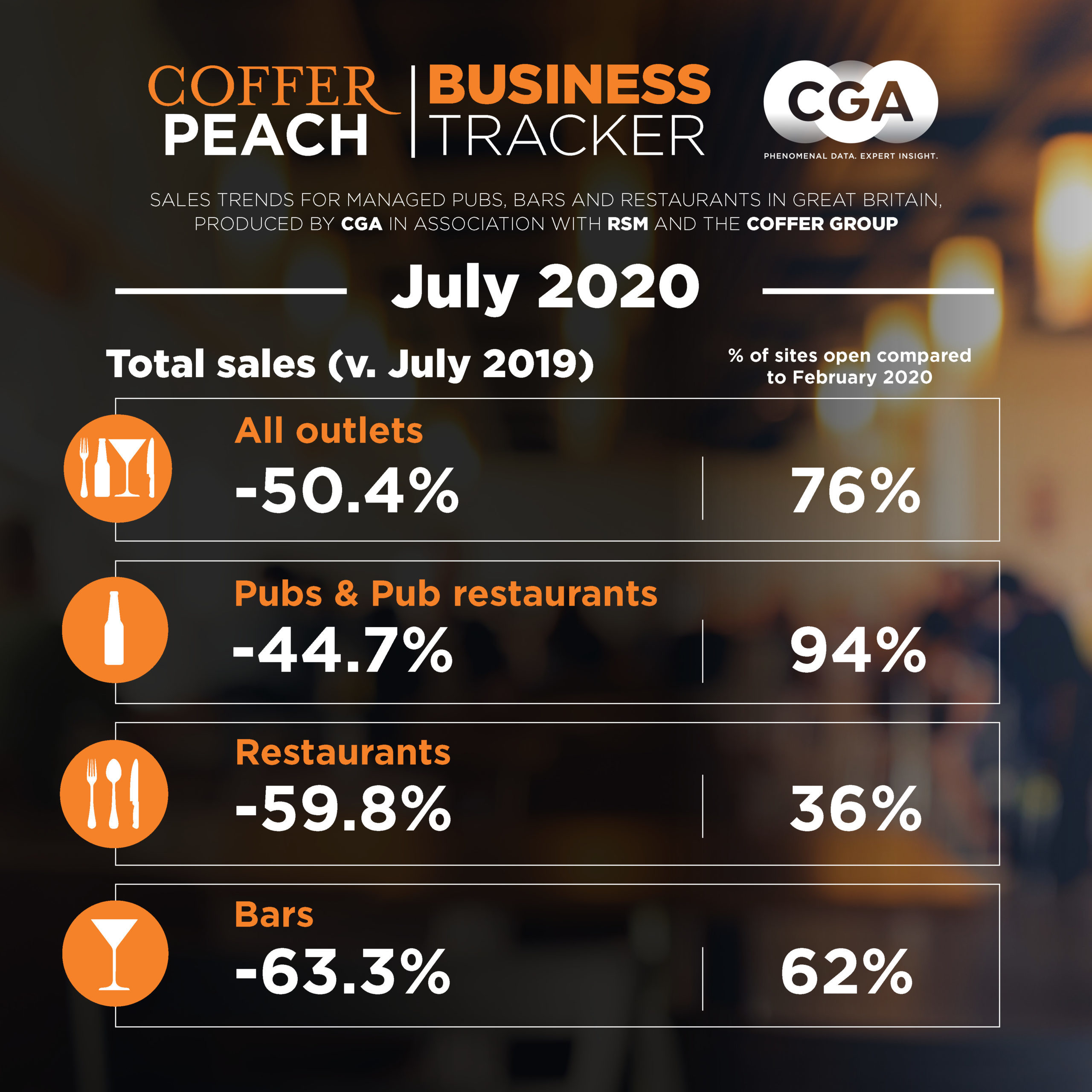 All parts of the market recorded trading well below July 2019 levels, but restaurants and bars and the London market struggled most, these new figures confirm.

“The figures are a reflection of the fact that reopening of sites has been gradual, and not all by any means are back in business, plus those that are open are in general trading at well below normal levels,” said Karl Chessell, director of CGA, the business insight consultancy that produces the Tracker, in partnership with The Coffer Group and RSM.

“They also paint a mixed picture, with pubs in general opening up more strongly than restaurants, and London which was hit earliest still struggling to gain traction,” added Chessell.

The Tracker figures show that overall 76% of the group-owned sites that were trading in February were open again by the end of July, but the contrast between pubs, bars and restaurants was stark. While 94% of managed pubs had reopened, just 62% of bars and only 36% of group-operated restaurants were back in business.

“Even before lockdown the casual dining boom had stalled and a number of groups were closing sites and restructuring. The COVID crisis looks to have accelerated that trend, and it is unclear how many of those group-owned restaurants will eventually reopen, certainly under current ownership,” added Chessell.

Delivery accounted for 13.1% of sales among the casual dining groups in the Tracker cohort in July, up from 7.4% in March when the effects of COVID were first felt and 5.9% in February.

“The growth in delivery has been a marked feature of lockdown, and is likely to remain an important sales component for those food-led business that make it through,” he added.

Among the managed pub groups, drink sales performed slightly better than food, with sales down 41% compared to minus 48%.

“That may be about people wanting to get out of the house for a pint or social glass of wine in those early weeks after reopening. So it will be interesting to see the impact of the VAT cut on food and the Eat Out To Help Out initiative on not just food sales in pubs but whether it will give restaurants more impetus to reopen,” he said.

Mark Sheehan, managing director of Coffer Corporate Leisure, said: “Despite the fanfare over the July 4 reopening date for hospitality, in reality trade is recovering slowly. The restaurant sector, already under severe pressure pre-COVID has been decimated by the lockdown. The pub sector has proven to be more resilient as expected and is now bouncing back strongly in many areas.

“The August numbers will be helped by more people returning to work, Eat Out to Help Out, and also habits starting to return to usual and so we will see a marked increase in certain areas. Central London, however, still lags the rest of the country.”

Paul Newman, head of leisure and hospitality at RSM, added: “Business interruption support from Government has been critical in saving the UK eating and drinking out sector. Nevertheless, July’s results lay bare the challenges that remain for operators. The return of consumer confidence is essential but this could take months. Key support including the rent moratorium and furlough scheme end in the autumn presenting a watershed moment for many. Urgent consideration should therefore be given to extending the Corporate Insolvency and Governance Act. The end of the Act brings the spectre of directors becoming personally liable for debts if they are found to be trading whilst insolvent from October 1. An extension would give pub and restaurant businesses more time to restructure their finances as sales begin to recover. The current Eat Out to Help Out scheme has given the sector some breathing space but more help is needed if jobs are to be saved.”

The July Tracker figures are the first monthly set of sales data released since March, when all pubs, bars and restaurants were closed down. Because reopening of the out-of-home market has been phased and gradual over July, with England reopening first, then Scotland and Wales, the Tracker has only collected total sales figures and not like-for-like for this month, but will resume like-for-like comparisons with August trading numbers.

Like-for-like performance has instead been captured on a weekly basis via the Tracker, and these figures have shown a steady increase in sales week-on-week among those sites able to open since lockdown was lifted and more sites have reopened.

“These total sales figures for July give us a clear picture, however, of how far the market still has to go to get back to pre-COVID levels of sales and also highlights the areas that remain under severe pressure, especially as working from home continues and footfall in city centres, and in particular central London, remains well down,” said Chessell.

“The drop in sales across the market actually began in February, as COVID started to hit the headlines, and escalated in March, so that by the end of March the managed pub, bar and restaurant sector had already fallen into year on year decline, down 2.7% on the previous 12 months. At the end of July after three months of zero trade it was down 32.4% year-on-year.”

A total of 49 companies, with between them over 7,500 sites open for business, provided data to the July Tracker.