Rugby fails to ignite pub and restaurant sales in October

• Collective like-for-like sales down 0.6% in October
• London trading lags rest of the country

Like-for-like sales across the sector were down an average 0.6% compared to the same month last year. Restaurant chains saw collective like-for-likes fall 0.7%, with managed pub and bar groups down 0.6%.

“Drink-led pubs did marginally better, with a 0.3% like-for-like increase over the month, but there was no big boost coming from customers wanting to watch the rugby on TV in the bar – probably due to the early morning kick-offs,” said Karl Chessell, director of CGA, the business insight consultancy that produces the Coffer Peach Tracker, in partnership with The Coffer Group and RSM.

“October is usually a quiet month in the eating and drinking out world – the lull before the Christmas rush – and so it has proved. Essentially, we are continuing to see a flat market. People are still going out, but there is no real growth,” he added.

Saxon Moseley, senior manager at RSM, said, “Against a backdrop of ongoing political and economic uncertainty, together with a wet and windy start to the autumn, operators will be quietly satisfied with like-for-likes that broadly match last year’s numbers. With the starting gun fired on a winter election, hopes will be raised that voters will look to escape the barrage of doorstep campaigners by hot-footing it to their local pubs and restaurants during the all-important festive trading period.”

Coffer Corporate Leisure managing director Mark Sheehan said, “The figures show that businesses outside the M25 did better than those in the Capital. However, it is worth noting that although it looks like London is underperforming, the strength of the London market is being driven by independents not captured by the stats, rather than branded concepts. The eating and drinking-out market is relatively stable despite dampened consumer confidence. This is reflecting the combined political and economic uncertainty not seen since the middle of the last century.”

Regionally, businesses outside of London did better than those in the capital, down 0.5% compared to a 0.9% fall inside the M25.

Total sales across the 58 companies in the Tracker, which include the effect of net new openings since this time last year, were ahead 2.3% compared to last October.

Underlying like-for-like growth for the Tracker cohort, which represents both large and small operators, was running at 1.7% for the 12 months to the end of October, which is just below the 1.8% registered at the end of September. 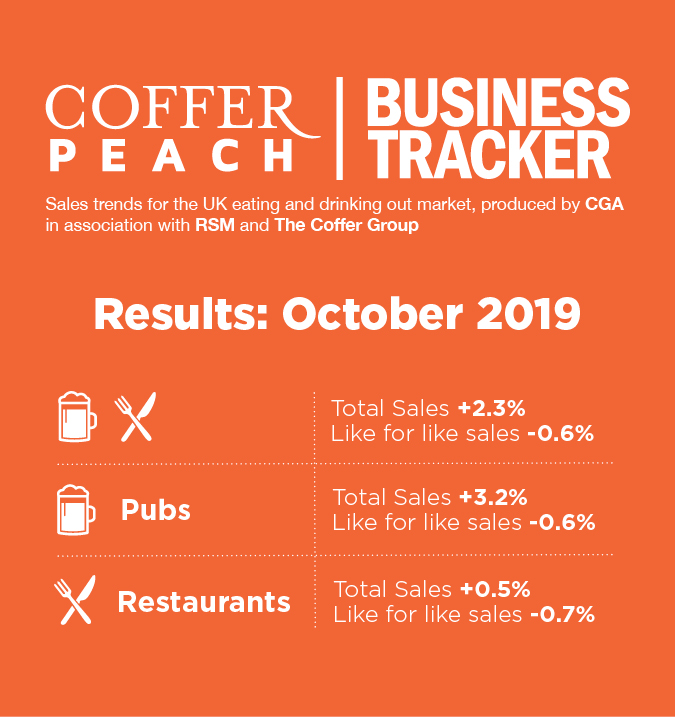