In contrast, figures from the British Retail Consortium showed total retail sales down 1.3%, with like-for-like trading falling 1.7%, against the same month last year. The BRC blamed uncertainty about a no-deal Brexit for reduced consumer spending.

“If Brexit worries put the public off shopping on the high street, they don’t appear to have stopped them going out to eat and drink,” said Karl Chessell, director of CGA, the business insight consultancy that produces the Coffer PeachTracker, in partnership with The Coffer Group and RSM.

“Just looking at retail as a barometer of the nation’s well-being, you would be forgiven for thinking we were deeply depressed. But the eating and drinking-out numbers paint a very different picture. It may be that pubs and restaurants are providing welcome relief from the constant news of Brexit uncertainty,” Chessell added.

Pubs had the best of trading during September, with like-for-like sales ahead 1.9%, with restaurant chains also collectively (restaurants and pub restaurants) seeing positive like-for-likes, up 0.4%.

“The warm weather at the end of the month certainly boosted drink-led pubs and bars, which together recorded a 2.6% like-for-like jump in sales. But it wasn’t just about the weather, with both restaurants and food-led pubs seeing growth, if admittedly more modest,” said Chessell.

Regionally, outside of London traded better in September, showing like-for-like growth of 1.3%, compared to 1.0% inside the M25. “The figures show generally encouraging trends across the sector; restaurants and bars, London and provinces,” said Trevor Watson, Executive Director, Valuations at Davis Coffer Lyons.

“The comparison with retail illustrates the extent to which consumers are opting for intangible experiences with their disposable leisure spend. This shows a move towards sustainable consumerism—where purchasers shun superfluous fashion goods in favour of experiences and are increasingly looking for sustainably-sourced foods and healthy eating menus, both away from the home and in the home,” said Watson.

“We continue to see a good appetite for good quality sites in London and nationwide from operators,” added Watson.

Paul Newman, Head of Leisure & Hospitality at RSM added, “Much to the relief of the embattled pub and restaurant sector, the spectre of a no-deal Brexit seems to have driven consumers to take solace in their local hostelry in September. With consumer sentiment set to be severely tested over the coming weeks, operators need to focus on operational excellence with only the leanest and most efficient likely to prosper in such challenging market conditions.”

Total sales across the 58 companies in the Tracker, which include the effect of net new openings since this time last year, were ahead 4.3% compared to last September.

Underlying like-for-like growth for the Tracker cohort, which represents both large and small operators, was running at 1.8% for the 12 months to the end of September. This compares to average monthly sales growth in the retail sector of just 0.2% over the last year, which the BRC says is an all-time low.

The Coffer Peach Tracker industry sales monitor for the UK pub, bar and restaurant sector collects and analyses performance data from 58 operating groups, with a combined turnover of over £9bn, and is the established industry benchmark. 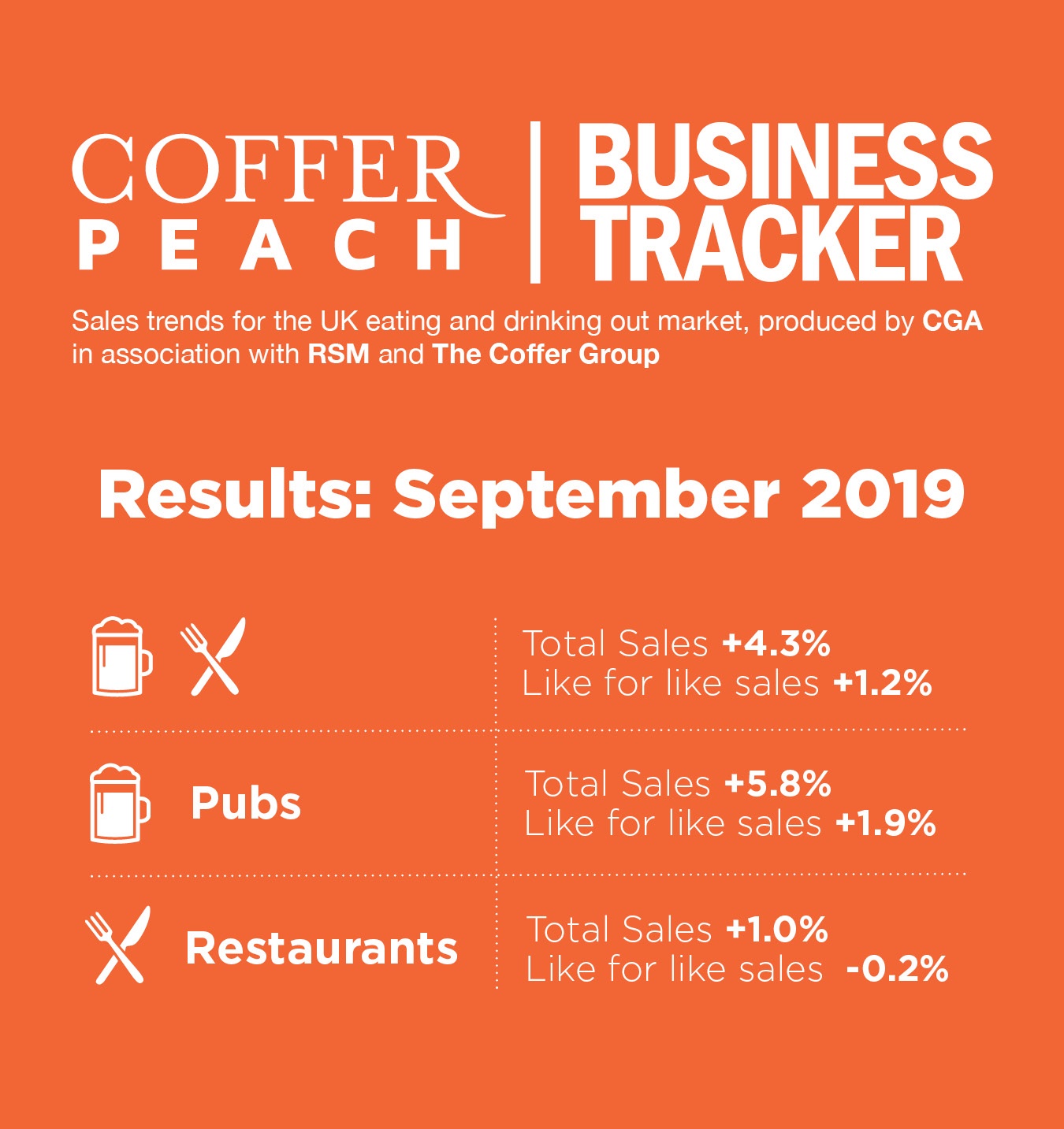