Britain’s managed pub, restaurant and bar groups saw sales fall back significantly in September after August’s Eat Out To Help Out campaign boost and the introduction of the 10pm curfew at the end of the month, latest data from the Coffer Peach Business Tracker show.

With 88% of group-owned sites reopened, up from 85% in August, total sales across across the whole managed sector were nevertheless 20.3% down on the same month last year, compared to being down just 12.2% in August. Like-for-like sales in those businesses trading were 14.7% below September 2019, having been flat in August.

Drink-led pubs suffered the most, with total sales down 22.7% and like-for-likes down 21.1% on September last year. Restaurant groups performed better, helped by the cut in VAT on food and delivery sales, with total sales down 19.6%, but like-for-likes just 6.7% below September 2019, helped by the fact that only 72% of group-owned restaurant sites were open and trading during the month. In contrast almost all (96%) of the country’s managed pubs, food-led and drink-led, had reopened.

“September figures show the massive importance of the Eat Out to Help Out initiative had on both sales and consumers’ willingness to go out during August. They also demonstrate how far the market needs to go to recover to pre-COVID levels – with the new catalogue of restrictions biting nationally and locally making that task even tougher,” said Karl Chessell, director of CGA, the business insight consultancy that produces the Tracker, in partnership with The Coffer Group and RSM.

Delivery accounted for 10.4% of sales among restaurant groups in the Tracker cohort in September, up from 8.8% in August and the pre-lockdown level of 5.9% in February.

Regionally, London still struggled during September, with many office workers, commuters, tourists and international business travellers still staying away. Total sales across managed pubs, bars and restaurants inside the M25 were down a hefty 32.1% on September last year, with collective like-for-like sales in those sites open down 24.2%. In contrast, outside the M25 the market saw like-for-like sales down 12.3% and total sales down 16.7%.

“While food sales will become an increasingly important in keeping the managed sector afloat, with table-service and the 10pm curfew in force across England and tougher restrictions in other parts of Britain, the situation is looking increasingly challenging for drink-focussed operations – and in September all parts of the market were in negative territory. Across the managed pub market as a whole, food sales were down 9% over the month, while drink sales were down 21.9% on last September.” added Chessell.

At the end of September, underlying annual like-for-like sales for the whole market were down 23.9% on the previous 12 months, with total sales down 35.3%.

Trevor Watson, executive director, Davis Coffer Lyons, said, “The recent EOTHO scheme, followed by the curfew and now the increasingly prevalent local lockdown restrictions, means there are clearly no significant conclusions to be drawn from short-term trading trends. The latest announcement that London is to join Manchester and enter Tier 2 is catastrophic. It is difficult to see how many restaurants and pubs in these city centre locations will be able to stay open. Neighbourhood areas will also suffer but not to the same extent. A ‘Tier 3’ status with increased government support would be preferable for such businesses.

“It is up to every operator to be as nimble as possible and to pivot and re-engineer their business to protect their staff and maximise opportunity. There is certainly no one size fits all approach any more – if there ever was. The on-going support of reduced VAT rates on food and the rates holiday are the on-going good news stories for operators. The moratorium on lease forfeiture continues to offer protection for now but is likely to be storing up bigger problems when it is eventually lifted as arrears continue to mount.”

Paul Newman, head of leisure and hospitality, RSM, said “These results lay bare the deepening fight for survival faced by operators as we head into winter in the midst of tightening coronavirus restrictions and the tapering of government support. In looking for some positives from the list of recent restructurings across the eating and drinking-out market, the reduction in supply is leading to better rent deals and landlord packages for those who are able to stay in the game. There is undoubtedly more pain to come but those operators in the best position to emerge on the other side will be leaner and more agile, focussing on an acceleration in delivery (accounting for 10.4% of sales among restaurant groups in September, up from the pre-lockdown level of 5.9% in February), embracing technology and balancing health and atmosphere in their venues.”

A total of 52 companies, with between them 9,373 sites open for business, provided data to the September Tracker 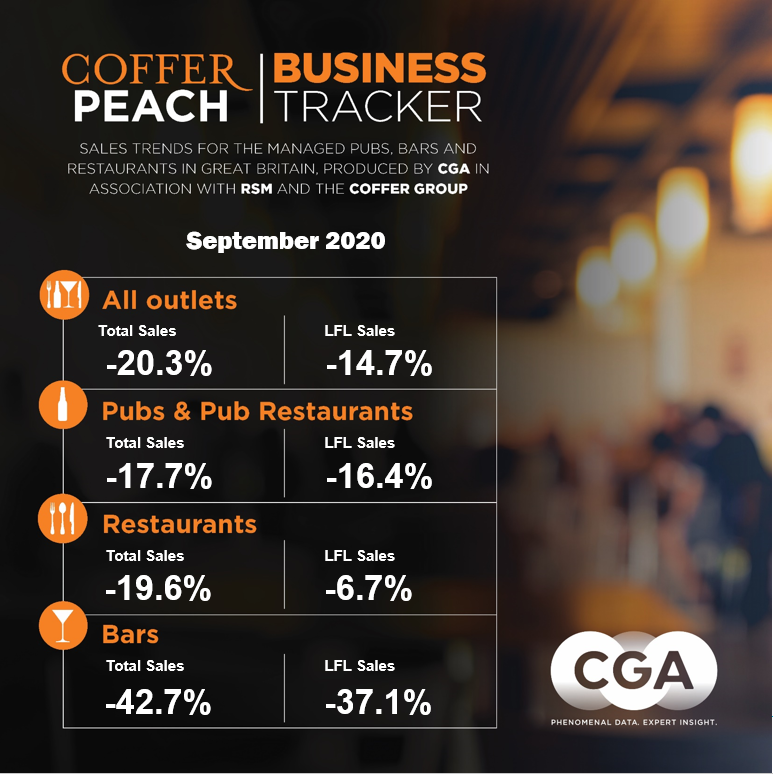