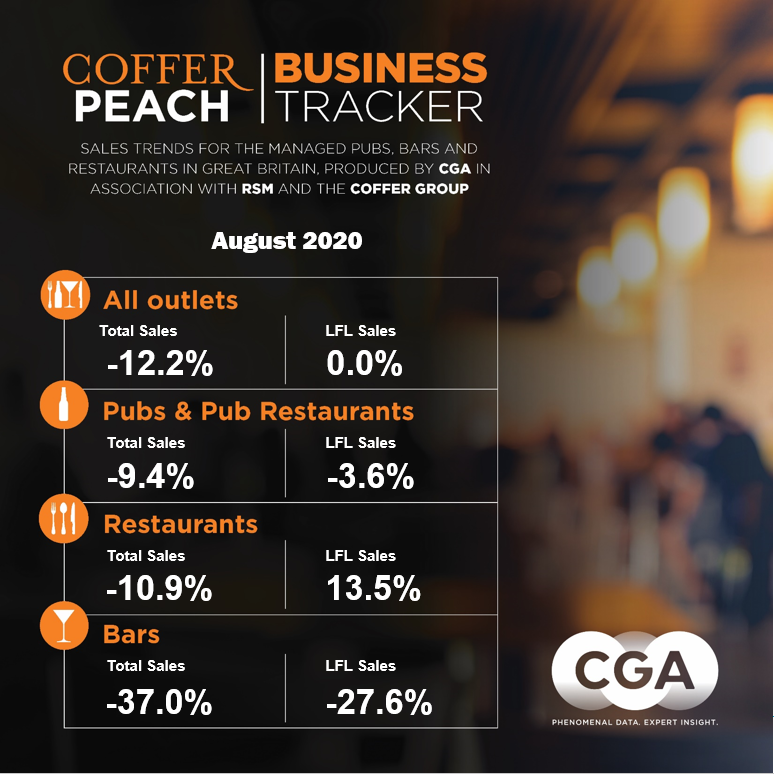 Britain’s managed pub, restaurant and bar groups saw collective like-for-like sales bounce back up to 2019 levels in August thanks to the Government’s Eat Out To Help Out campaign, latest figures from the Coffer Peach Business Tracker show.

But while food-led businesses forged ahead, drink-led operations still found trading tough. The London market also trailed significantly behind the rest of the country.

With 85% of group-owned sites reopened, total sales across the whole managed pub, bar and restaurant market were still 12.2% below last August’s levels, but like-for-like sales in those businesses trading came out flat, so matching the sales volumes seen this time last year.

“To get back to last year’s sales levels in those sites that were able to trade is some achievement just a month after the industry started to reopen, and credit has to go to the Government-backed discount scheme that attracted so many people back out to eat, plus the cut in VAT on food. But of course not all parts of the market benefited, and there will also be concern about what the Government’s new legally-enforced restrictions will have on consumer confidence in the weeks ahead,” said Karl Chessell, director of CGA, the business insight consultancy that produces the Tracker, in partnership with The Coffer Group and RSM.

Restaurants enjoyed the biggest boost last month, with group-owned sites that were open seeing collective like-for-like sales up 13.5% on August last year. But because only 65% of chain-owned restaurants that were trading back in February were open again, total sales across that part of the market were still down 10.9% on last year.

Managed pub groups, which between them had 95% of their sites trading, had a more mixed experience, with like-for-like sales down 3.6% on last August and total sales down 9.4%.

Regionally, London still struggled over August despite the assistance of the Eat Out To Help Out campaign with many office workers, commuters, tourists and international business travellers still staying away. Like-for-like sales across pubs, bars and restaurants were down 13.4%, with total sales down 28.1%. In contrast, outside the M25 the market saw like-for-like sales up 3.2% and total sales down just 7.9% on last August.

While restaurants in London did overall record positive like-for-likes, up 2.6%, they still lagged considerably behind the rest of the country.

“Restaurants have had a good month, and although more were open – 65% against only 36% of group-owned sites in July – it is unclear how many of those still shuttered will eventually trade again, certainly under current ownership, and whether they have missed the boat?” said Chessell.

“While in July pubs tended to have the best of the early weeks of reopening, food was undoubtedly the winner last month. We will have to see if that starts to balance out again in September and if the momentum of Eat Out can be maintained with the Government’s new legal restrictions in force,” he said.

Delivery accounted for 8.8% of sales among the casual dining groups in the Tracker cohort in August, down from 13.1% in July, but still up on the pre-lockdown percentage of 5.9% in February. “The growth in delivery has been a marked feature of lockdown, and although the incentives to eat out in August will understandably have brought its share down, it is still up on the start of the year and likely to remain an important sales component for those food-led business that make it through,” Chessell observed.

Paul Newman, head of leisure and hospitality at RSM said “These results demonstrate what a huge success the Eat Out To Help Out scheme has been in spurring households to visit pubs and restaurants in August, many for the first time since lock-down began. It is no surprise that food-led businesses benefitted most with the proportion of delivery sales seeing a temporary dip from the highs of lock-down. September is another crucial month for the sector with the furlough scheme starting to unwind and the rent moratorium due to end. Operators will be desperate for this sales momentum to continue into the autumn but with further government backed support looking unlikely, it seems inevitable that more job losses are just around the corner.”

Trevor Watson, Executive Director, Davis Coffer Lyons says “The August figures are very much a one off and cannot be used to indicate any trends. The boost to food-led establishments due to Eat Out to Help Out is short term; the longer-term trend is the re-distribution in trade towards residential districts and away from commercial city centres and London in particular.

The autumn sees the end of furlough and potentially the end of the moratorium on lease forfeiture. These twin threats are the biggest possible challenge to the industry, so although the doors are open to many pubs and restaurants, the market is more unstable than it ever been.  Pictures of people eating out in pub gardens, and healthy looking like for likes present a misleading and artificial impression of where the market is right now.”

At the end of August, underlying annual like-for-like sales for the whole market were down 21% on the previous 12 months, with total sales down 31.9%.

A total of 51 companies, with between them 8,863 sites open for business, provided data to the August Tracker.