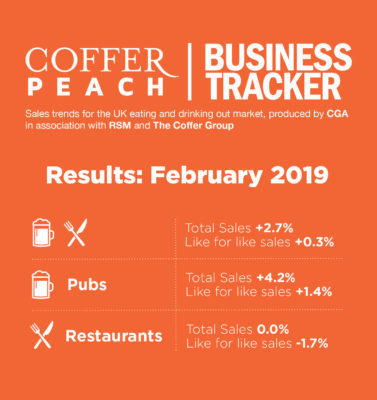 Drink-led pubs were the strongest performers, with London also out performing the rest of Britain, the monthly Tracker figures show.

“The mini heatwave towards the end of the month certainly boosted pub trading, and also helped restaurant sales, as people enjoyed the unseasonal sunshine, but unfortunately it wasn’t enough to move the whole market much. The branded restaurant sector is still suffering from declining sales, and despite a better end to the month, early February was generally poor for restaurants,” said Karl Chessell, director of CGA, the business insight consultancy that produces the Tracker, in partnership with Coffer Group and RSM.

“While people will remember the sun, it was cold at the start of the month and school half-term holidays appear to have given no more of a boost to sales than they did last year,” added Chessell. “Even within the managed pub market food sales are under pressure. The trading uplift in February has essentially come from increased drink sales, which were up 3.5%, against a 0.9% fall in food.”

London saw overall like-for-like sales growth of 1.0% over the month, compared to just 0.1% outside the M25, with a big difference between the performance of managed pubs and chain restaurants in the capital, with pubs up 3.0% against a more significant 2.2% sales decline for restaurants

In the rest of the country outside the M25, the difference in performance was less stark, with pubs’ like-for-likes up 0.9% and restaurants down 1.2%

Mark Sheehan, Managing Director of Coffer Corporate Leisure said: “There is no quick fix for the restaurant sector. Oversupply in some areas will mean that we may continue to see negative numbers for the foreseeable future, especially within the M25 where competition is fiercest.”

“Whilst there is continued cause for optimism amongst Britain’s managed pubs, the expected pick up for casual dining resulting from the closure of under-performing sites compared to a year ago failed to materialise,” said Paul Newman, Partner, Head of Leisure and Hospitality at RSM. “The fact that sales are continuing to fall is a huge challenge for the eating out sector and underlines the fierce competition for discretionary spend on the High Street, as consumers tighten their purse strings in preparation for Brexit.”

Total sales across the 51 companies in the Tracker, which include the effect of net new openings coming on stream since this time last year, were ahead 2.7% compared to last January.

Underlying like-for-like growth for the Tracker cohort, which includes both large and small groups, was running at 0.9% for the 12 months to the end of February.

The Coffer Peach Tracker industry sales monitor for the UK pub, bar and restaurant sector collects and analyses performance data from 51 operating groups, with a combined turnover of over £9bn, and is the established industry benchmark.